Sewing and fabric adventures in Europe

Did you know that 2014 is the Chinese Year of the Jumpsuit??

No?! That’s probably because I just made it up – but it should be! It’s still January and I’ve made two jumpsuits already and anyway, the animal theme is getting a bit old isn’t it??

I made three jumpsuits last year and and I’m on a jumpsuit roll again this year! It started when I began searching for patterns to make something similar to this eye-catching  jumpsuit by Italian designer Luciano Soprani.

The closest pattern match I could find was this Ralph Pink jumpsuit.

This has the same front opening that my inspiration jumpsuit has and unlike the other jumpsuits I’ve made before, doesn’t have an elasticated waist.

The pattern comes as a downloadable PDF in multiple sizes. You can choose to print and then cut out whichever size pattern you choose, so there’s no need for pattern tracing. I made the UK size 8 and made no alterations to the pattern other than shortening the legs by about five centimetres and putting D-rings on the self-fabric belt.

I recommend adding two D-rings to one end of your belt as the belt fastener because they’re fabric savers – you don’t need as much fabric for your D-ring belt as you do for a belt that’ll be tied in a knot or bow. Also, once fastened, the belt sits flatter and doesn’t need constant readjusting like a bow or knot do. Plus I think D-rings look edgier!

This pattern is a fabric eater depending on how wide your fabric is. Ralph Pink recommends using 3.5m of a fabric with good drape, such as silk. The pattern is cut as one whole piece, not bodice and pants pieces as it looks like the Luciano Soprani jumpsuit is.

For my first trial of this pattern, the only fabric I had in my stash in this quantity, that I was willing to sacrifice for a pattern test was this blue cotton. This has very little drape and is so crisp, it rustles as I walk but it worked fine just to see how the fit of the pattern was. 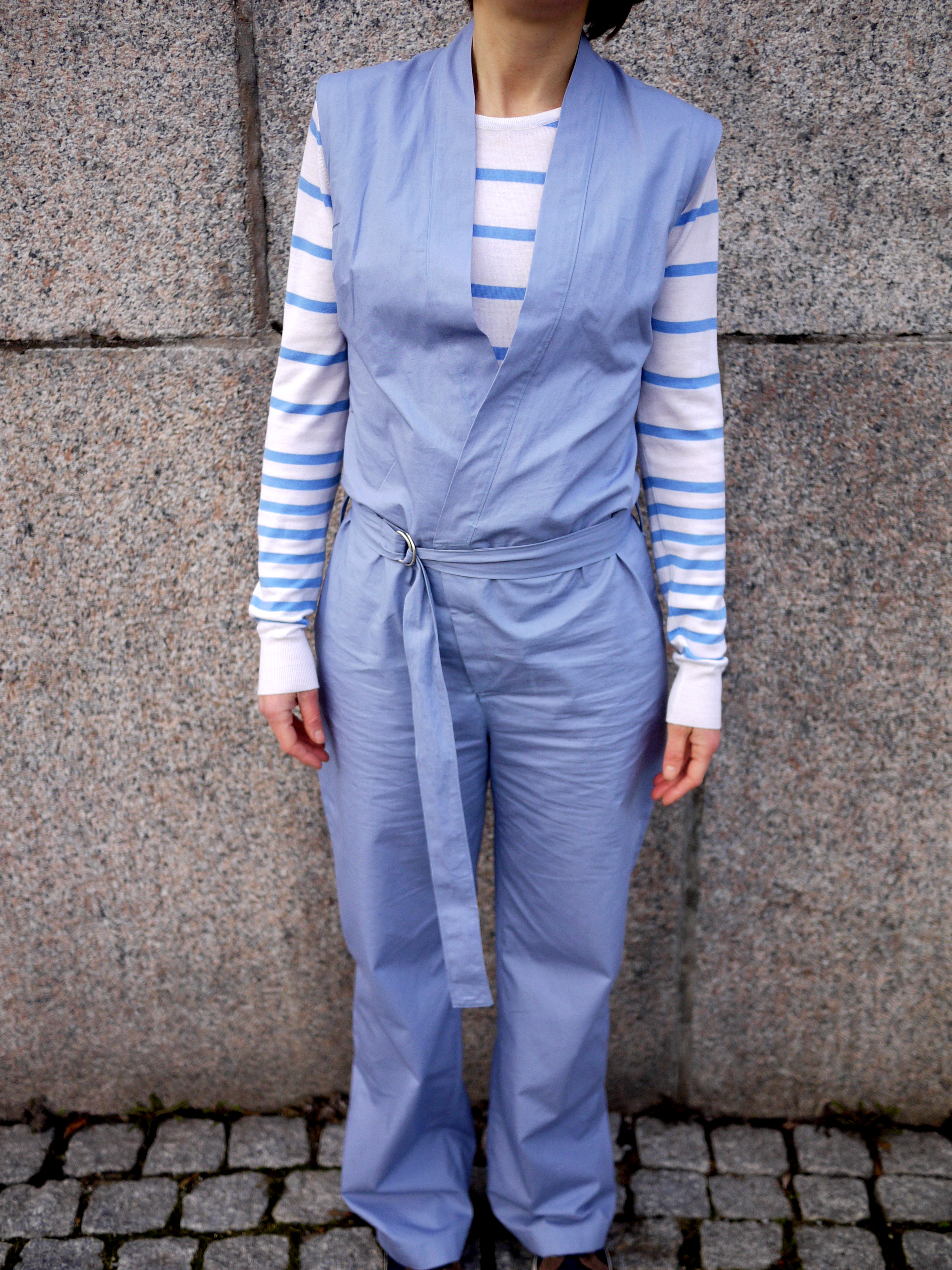 I much prefer the pattern in this supple Italian linen/cotton mix from Anita Pavani Stoffe, that I chose for my second version.  As well as having a better drape, the fabric was also wide enough that I could squeeze the pattern pieces out of only two metres. 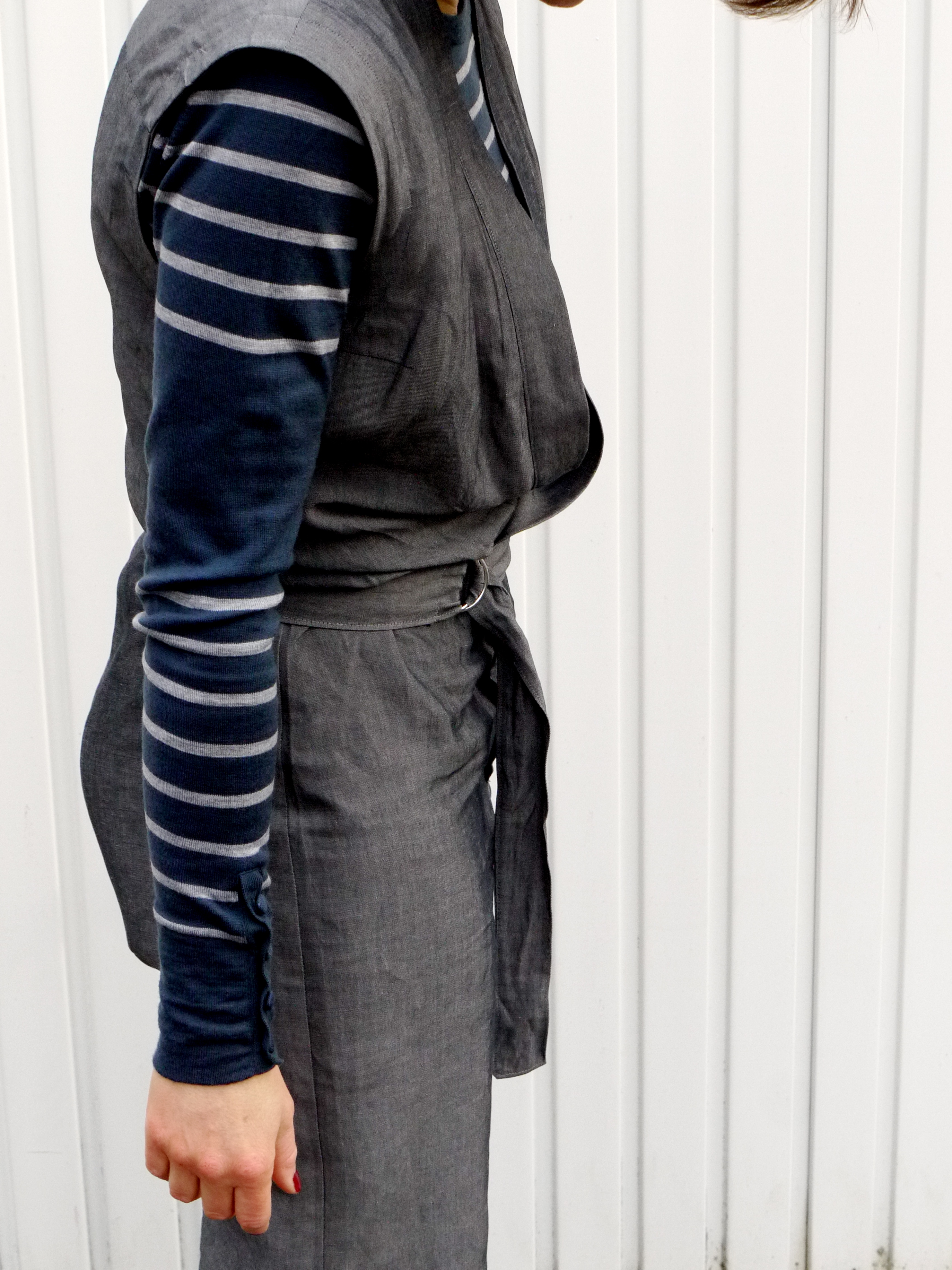 Ralph Pink’s instructions were easy to follow and I didn’t have any major issues making this up. My only advice would be to take your time with the fly front. Care needs to be taken when sewing up the centre front seam on the crotch so that the front left piece can still overlap the right front piece once the seam has been sewn up. Then you need to decide how to close the fly. For my blue jumpsuit I went with buttons.

For the grey, I used poppers. I prefer the poppers.

I’m not finished with this pattern yet! I want to try it in a patterned fabric and I’m definitely making a lightweight denim one for the spring. I’m still searching for a teal green suiting so that I can finally make a closer match to Luciano Soprani’s wonderful jumpsuit.

Anyone else following this year’s jumpsuit theme?? What’s on your sewing table?

Irrelevant ramblings and some goals for 2014