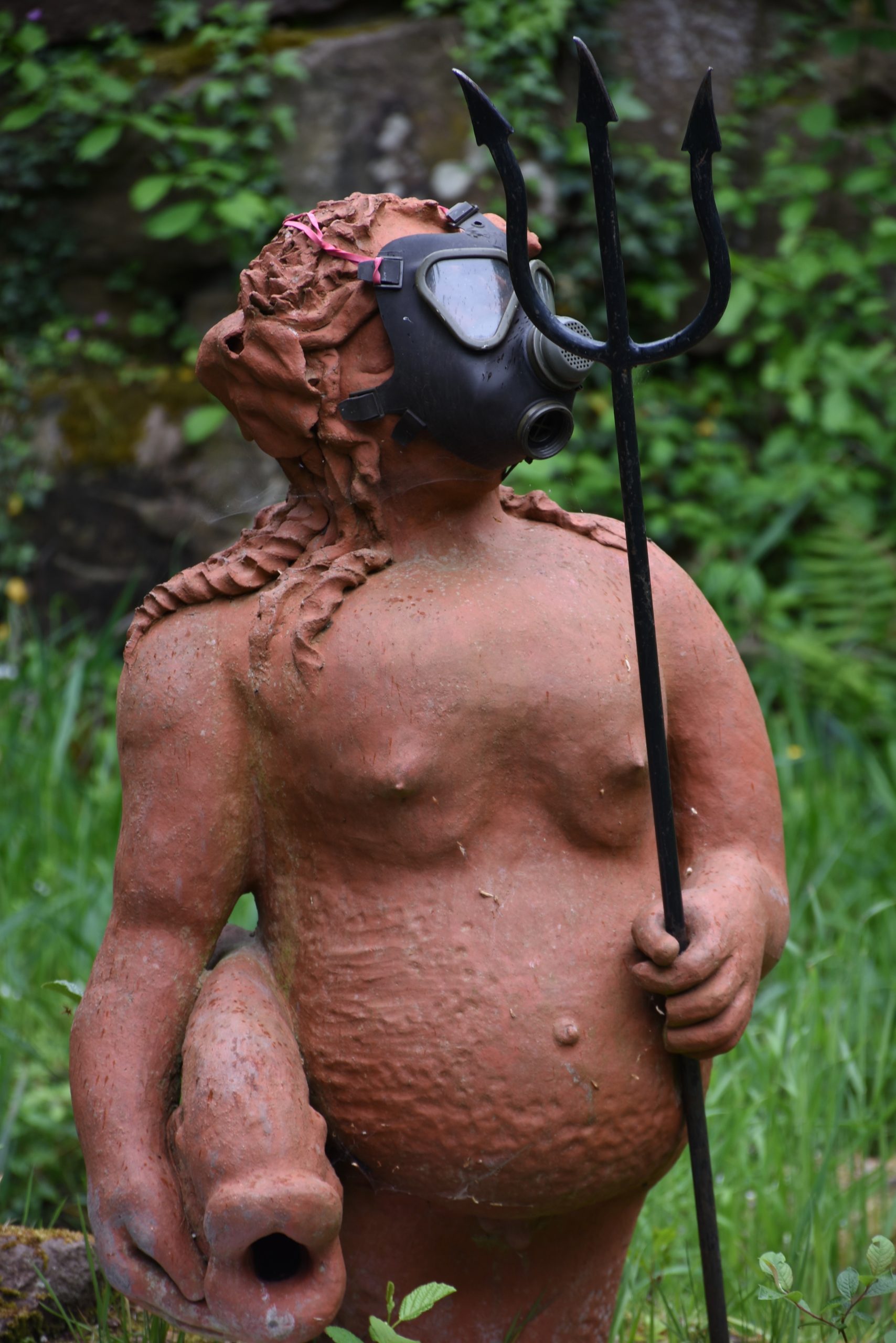 It’s been a while since I’ve updated this blog and I usually only post about sewing, but I feel the need to unload some thoughts about the current Covid 19 virus global pandemic.

The pandemic has thrown our lives into disarray, unprecedented in our life times. We’re in unchartered waters and it’s unsettling.

When lockdown started mid-March 2020 in Germany, I was in the middle of reading ‘Pompeii: The Life of a Roman Town’ by Cambridge classics professor, Mary Beard.  I came across this quote:

‘A tiny problem becomes a vast one if you ignore it.’

This was graffitied onto a wall 2,000 years ago. It struck me how poignant and relevant it is in our current situation.  The viral pandemic is ongoing and infection numbers are increasing globally.  Also the social unrest that exploded in a backlash against George Floyd’s death by a police officer in the US in May 2020, is gaining momentum across the world as more societies demand an end to racial discrimination.

It struck me that as people, we haven’t changed in millennia. We’re just as flawed as our Roman relatives. Still ignoring problems.  Are we destined never to change?  Sure we now drive round in fancier chariots than the Romans but we haven’t completely reinvented the wheel, we still rely on them as our main form of transport. Our diets also haven’t revolutionised.  Bread is also still a staple just like it was for the ancient Pompeiians.  Bread loaves unearthed in the ovens of Pompeii, carbonised by the volcanic eruption, look identical to loaves baked in ovens in Rome today.

This got me thinking about whether we’re really capable of fundamental change, the kind of societal change necessary to eliminate racism and give people of colour the equality they deserve for instance.  Or to address perhaps the biggest threat to the survival of our civilisation and the elephant in the metaphorical room, global climate change.

‘A tiny problem becomes a vast one if you ignore it’, could easily have been a Tweet on Twitter in 2020 in reaction to the way numerous governments around the world chose to ignore infection rates from the Covid 19 virus in the early stages of the outbreak.

For various reasons including arguably, lack of political will, lack of equipment and other reasons which will no doubt come to light retrospectively, when we look back and examine our response to Covid 19 in future studies, many governments chose to ignore established methodology that had proven effective in controlling previous viral epidemic outbreaks.  Governments that did proactively track, trace and isolate infected people with antigen testing before the disease had a chance to rip through communities and spiral out of control, have faired better in this pandemic so far.  If it hadn’t been ignored in the early stages by some governments, perhaps countless, needless deaths would have been avoided.

The quote could also refer to racist remarks and policies of world leaders we’ve chosen to ignore until a police officer thought he had the right to kneel on a black man’s neck for almost nine minutes and end his life in the US.  Thanks to the contemporary societal tool of social media, we were able to witness this atrocity, which jolted us out of our ignorance and complacency and forced us to confront this reality with open eyes.

History will be the judge of our actions just as it is for our ancient relatives, the Romans.

We have no idea why a Roman scratched the original words onto the wall, in Pompeii, the town obliterated by the volcanic eruption of Mount Vesuvius in Italy during the Roman period, and unearthed by archaeologists when the ruins of Pompeii were excavated.

At the time of Mount Vesuvius’s volcanic eruption, the inhabitants of Pompeii were repairing earthquake damage to the town’s buildings and sewer system. They had no idea that the earthquakes were caused by seismic activity associated with the volcano and were signs that an eruption was imminent. This was beyond the scope of their knowledge at the time.

Some people feared the earthquakes were ominous as illustrated by other graffiti found in the town urging people to flee because something terrible was coming, likely interpreted as bad omens from the gods.  The majority of the town’s inhabitants heeded the warnings and fled and escaped but several thousands ignored them – it’s impossible to calculate exactly how many because their bodies were vaporised by the pyroclastic flow of the eruption.  Those who were unable or unwilling to leave the town, met their fate on 25 August 79 CE when Vesuvius exploded and buried Pompeii in pumice and ash, killing about 2,000 of the estimated 20,000 town inhabitants.

If you visit the ruins of Pompeii today and see the casts of the bodies of the victims of the eruption, curled up in obvious agony, it’s hard not to be moved and wonder why everyone didn’t flee when they had the chance. Why did Pliny the Elder sail his boat into the danger in a fruitless effort to save others and needlessly end his life? Of course a mere man in a boat had no chance to change the destructive force and might of the volcano.

But of course, hindsight is a wonderful thing.  We gaze at the twisted bodies in Pompeii and wonder why they had to die. The volcanic activity started days, weeks, perhaps years before the fateful eruption, but the people of the area didn’t abandon their lively hoods in the town. We can only judge these people now though because we are physically confronted by casts of their remains and view them through today’s lens with the benefit of improved knowledge of geographical phenomena and the dangers they pose to humans.

Like in the case of racism and the growing civil rights movement of Black Lives Matter to rid society of it, even though black people have been discriminated against for as long as they’ve been in the US, society chose to ignore this reality until we were all forced to confront it thanks to the video showing the atrocity of Floyd’s death.  We know the truth but it’s inconvenient to do anything to change it when so many benefit from the situation and status quo.

Will we apply our improved wisdom to our current predicament or will we choose to keep ignoring the dissenting voices and the inconvenient truths. Unfortunately, history shows us that we can’t ignore these truths indefinitely, they have a nasty habit of biting us in the behind eventually, it’s just a matter of time.

Twelve years ago, I studied a course in sustainability in Sweden.  We learnt a stark and alarming prediction. It’s estimated that if we continue our current our way of living , what the Romans would have called in Latin our modus operandi, that consumes four times planet Earth’s available resources every year, in as few as two more generations, human kind’s existence will no longer be possible.  How long will we ignore theses signs of impending disaster and threat to our existence?

We’re still at the beginning of this pandemic the politicians and scientific experts repeatedly tell us, but as life gradually resumes and new normals emerge with safeguards in place that we hope will mitigate further infection waves – mask wearing, social distancing and hand washing, etc – have we had enough of a shock to our global systems to effect any lasting changes to mitigate arguably the greater global threat of climate change?

This pandemic has shown us how bad we are at facing global threats.  Countries initially reacted in ways to protect only their own interests and as a world of united peoples, we failed to respond in a united way.  Bill Gates urged innovation as a way out of the current crisis but have countries such as the one I’m in, Germany suffered enough of a detrimental impact to fundamentally change the status quo that’ll reverse the human impact on Earth’s climate.

Although the crisis has been disastrous for the economy as many businesses were forced to close, thankfully infrastructure wasn’t destroyed so we can carry on as before.  Climate change potentially does have the ability to destroy infrastructure though such as by forest fires, hurricanes and flooding. The detrimental effects of that prospect are unimaginable when gauged against the ability of a virus to bring the world to its knees in such a relatively short space of time.

Have we changed our thinking in a fundamental way from the shock of the current pandemic crisis to address these problems with new solutions that will reverse our patterns of consumption for the climate and society.  The pause in car production in Europe this year seems like an ideal chance to get started on that. Will we miss this opportunity?

Since the lockdown was lifted in China, car production has increased by 120% of pre-lockdown levels because people are avoiding public transport for fear of infection and air pollution is already back to pre-lockdown levels.  The outlook so far is not looking promising for the environment.

There’s been talk in the news media about the creation of more bicycle lanes in Europe and other incentives such as bicycle buying subsidies in France to entice us away from our cars and our reliance on fossil fuels.  Efforts seemed to be being made to maintain the return of nature observed during lockdown and the clear, smogless skies we enjoyed when global fuel emissions were significantly reduced.  With car sales in the Far East up it feels like we’ve already abandoned that goal.

Mask wearing, arguably a vital part of our mitigating strategy to contain the Covid 19 viral infections is also now adding to the environmental pollution problems in Europe.  Face coverings are a necessary a fire fighting tool in our current pandemic fight, they’re ironically exasberating, perhaps a bigger problem.  According to media reports, the coasts of the Mediterranean are now littered with discarded plastic disposable gloves and paper masks. The new signs of our time.

I don’t have answers to any of this, only more questions.  I’m not an expert on pandemics, sustainability or history. I’m just a concerned global citizen, sharing my thoughts and scrawling graffiti, just like my Roman cousin did two thousand years ago, on my little bit of the internet wall.

‘A tiny problem becomes a vast one if you ignore it.’

Mulling these wise words over and hoping for the best.

4 thoughts on “Are we capable of change or are we doomed to repeat history? Lessons from the destruction of the ancient Roman city of Pompeii.”

Begin typing your search term above and press enter to search. Press ESC to cancel.